https://ipc2u.com/articles/knowledge-base/how-is-an-industrial-mainboard-better-than-an-office-one/
10:36 17.09.2021
Home
Knowledge Base
Knowledge Base
How is an industrial mainboard better than an office one?

How is an industrial mainboard better than an office one? 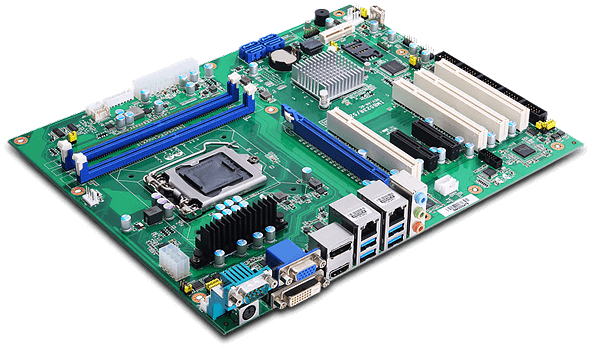 Can you tell the difference between an industrial computer and an office one? Probably you can. Typically, an industrial computer is described as a specialized device with extra reliability, designed for solving various industrial tasks. This type of PC is designed to work around the clock in harsh operating conditions at high or low temperatures. An ordinary commercial-grade PC simply cannot work in such conditions and will quickly fail.

An example of a classic industrial computer iROBO-40615-37T2

The external appearance of an industrial computer already suggests that the PC is protected from shock, vibration, dust, moisture and electromagnetic interference. However, the difference is not that easy to spot when we are talking about the internal components. It seems that all PCs are the same inside, with the same components installed: a mainboard, a central processing unit, RAM memory, drives, etc. In fact, there really is a lot of difference, and it is extremely important. 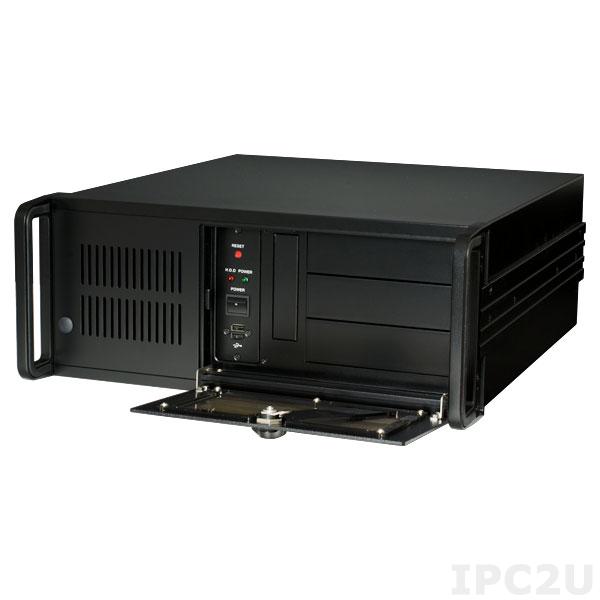 In another article, we have overviewed industrial flash drives and RAM modules in detail with the production of a Taiwanese company Innodisk as an example, and now we will take a look and see how an industrial motherboard differs from a commercial one and why it is necessary to use a computer based on an industrial board to solve production tasks.

Why do you need an industrial computer for your business?

The mainboard is the main component of any computing system. Thanks to it, all important components can interact with each other, thereby forming a single system, which we eventually call a computer. Why is it worth using an industrial computer in business? Here are five main reasons:

№1: Highly reliable component base. Industrial PC components have been designed and tested to withstand the harshest operating conditions. Also, all the functionality that is designed specifically for the implementation and deployment of software and hardware complex in a business environment or in production is required to be tested. An industrial computer is designed to run 24 hours a day, 7 days a week by default.

№2: Durability. In conditions where a commercial PC will overheat or simply refuse to work, an industrial PC can handle the task with ease, thanks to the reliable component base of an industrial PC, which has an increased operating temperature range, making it possible to build a system without active cooling (fans), which, in turn, means excluding any possibility of dust entering the PC chassis. The lifespan of industrial computers is much longer than comparable commercial models. Moreover, high-quality materials are used in the construction of industrial computers, which are durable and long-term.

№3: Long-term support. The component base used in industrial computers is supported on average for 15 years. Also, it often can support legacy device connectivity or legacy software applications.

№4: Wide power range. Different supply voltages in a company network can make it difficult to connect computers, requiring additional power adapters and increasing the overall cost. To solve this problem, many industrial computers have an extended input voltage range of 9 VDC to 48 VDC and additional power protection circuits.

So, what is the difference between an industrial mainboard and an office one?

However, over the past few years, the situation has changed. Commercial board manufacturers began offering industrial mainboards under their own brands: MSI IPC, ASRock Industrial, GIGAIPC, and AAEON (Asus). It is not yet known how this will affect the characteristics of mainboards, but we can already say that the choice options for end consumers have expanded.

Are there any other advantages of an industrial mainboard over an office one? Of course, and here is a list of the most important ones:

Legacy software support. If a specialized software and hardware solution is designed for a specific task based on an industrial board, then you do not have to worry that in a few years you will have to redesign the software due to the fact that the board has been discontinued or is not available for order.

Unique design and form factors. Industrial mainboards come in special form factors that may not be found in the commercial segment. For example, computers with many expansion slots are based on PICMG 1.3 boards. There are also very unique form factors, for example, PCISA. PCISA processor boards have two buses at once: PCI and ISA. Such boards are produced only by the Taiwanese company iEi. 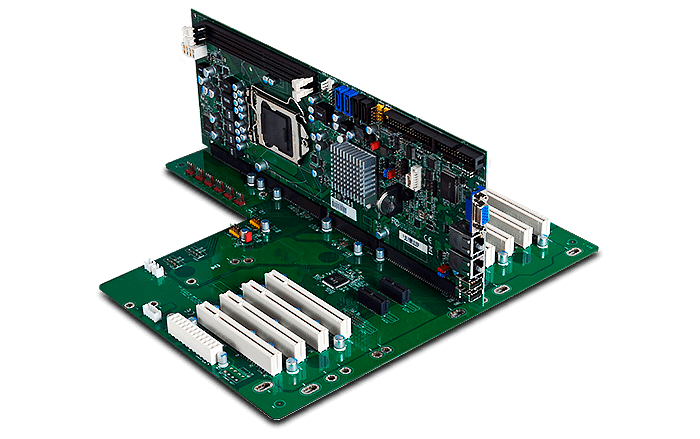 PICMG 1.3 processor board installed in passive expansion board

Commercial chipset use. Most industrial mainboards are based on Intel Q-series chipsets, designed specifically for the corporate market. Intel Q-Series Chipsets combine high functionality with advanced security and administration capacities. Mainboards based on AMD chipsets are less common. Also, a separate segment of the market is occupied by mainboards based on ARM-like processors. These boards are designed for special tasks. 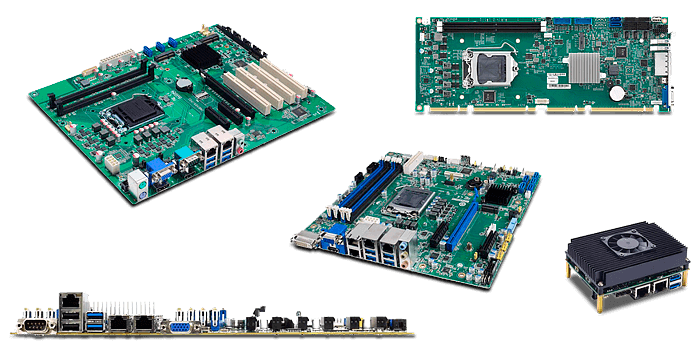 An example of industrial boards of different form factors

Based on the above differences between an industrial mainboard and a commercial one, it becomes clear that an ordinary office PC will not be able to solve production tasks in harsh operating conditions, while a computer based on an industrial mainboard will be able to work for decades in 24/7 mode, even at sub-zero temperatures. An industrial board will not go EOL in a year, and if a client needs to customize it, expand the functionality and support outdated interfaces, the manufacturer will be able to produce such a board even in small quantities.

You can always find an industrial mainboard or a ready-made industrial PC for any task in IPC2U catalogue.