https://ipc2u.com/articles/knowledge-base/flash-drives-how-to-make-the-right-choice/
20:50 03.03.2021
Home
Knowledge Base
Knowledge Base
Flash drives: How to make the right choice?

Flash drives: How to make the right choice? 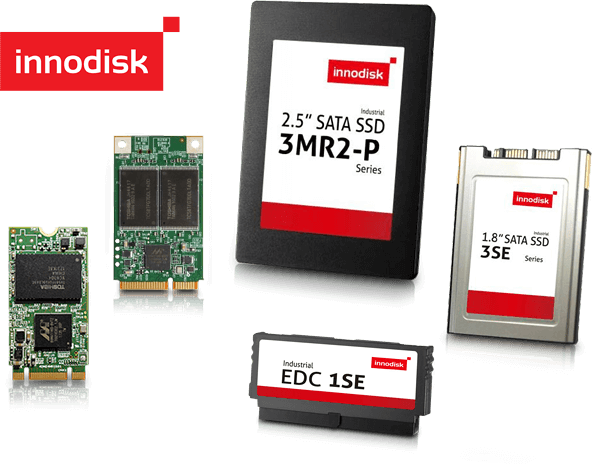 In this article, we will take a quick look at the architecture and structure of flash memory and the process of choosing an industrial SSD.

An SSD (Solid State Drive) is a non-mechanical storage device consisting of flash memory chips and a microcontroller.

NOR and NAND architectures

There are two flash memory architectures - NOR and NAND, differing primarily in the method of connecting memory cells. Each of them has its own advantages and disadvantages, which determine the scope of application of each technology.

NOR memory was named so after the special data markup (logical Not OR). The NOR design uses a classic two-dimensional conductor matrix with one cell at the intersection of rows and columns.

With this arrangement, NOR provides high-speed, random access to information, and can write and read data at a specific location without having to access memory sequentially. Unlike NAND memory, NOR memory can access data up to one byte.

NOR technology is at advantage in situations where data is being written or read randomly. Therefore, NOR is more often used as program memory for microprocessors, for example, BIOS memory of a personal computer, memory for storing small auxiliary data, or for storing an operating system in cell phones and tablets.

NAND memory is named after another special data markup (logical Not AND). Basically, the matrix is the same as in NOR, but instead of one cell (transistor), a column of cells in series is found at each intersection. 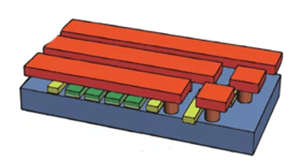 NAND memory writes and reads data at high speed, in sequential read mode, arranging data into small page blocks. NAND memory can read and write information page by page, but unlike NOR, it cannot access a specific byte.

The price of an SSD using NAND architecture is less than NOR; also, NAND chips have a higher density of data. NAND architecture is commonly used in SSDs, USB drives, memory cards, mobile phones for storing user information, and other devices in which data is written sequentially.

In this article, we will mostly focus on the NAND architecture as it is used in most modern solid-state drives.

The main reason for the development of a second generation of NAND flash was the manufacturers’ desire to reduce the cost of flash memory, considering that the technical process had already approached 10 nanometers and further crystal size reduction along the X and Y axes had became impossible. 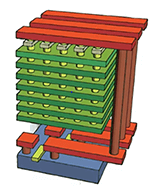 An important feature of the new 3D NAND architecture is the vertical layout of the cell blocks on the chip, where one more axis has been added - the vertical Z axis. The cells are superimposed in layers, as a result, each crystal has a multilayer 3D structure.

This vertical structure provided a breakthrough in flash memory density. The emergence of the vertical axis removed the dependence on other axes, due to which the need to reduce the crystal disappeared, and many manufacturers returned to the 30-nanometer process technology, which ultimately led to a decrease in the cost of manufactured products.

A memory cell can store 1, 2, 3 or 4 bits of information. Physically, all 4 types of NAND memory cells are composed of the same transistors, only the amount of charge stored by the cell differs.

More charge levels are found in multi-bit cells; that’s why they are called multi-level cells (MLC). MLC devices are cheaper and have more capacity than SLC devices, but they also have a higher access time and their maximum number of rewrites is much lower. Usually, MLC means memory with 4 charge levels (2 bits) per cell.

Cheaper (in regards of capacity) memory with 8 levels (3 bits) is called TLC (Triple Level Cell). TLC also lags behind SLC and MLC in read/write speed and the number of Program/Erase cycles.

There are also devices with 16 levels per cell (4 bits), QLC (quad-level cell). QLC technology is the most affordable in terms of the cost of storing 1GB of data, nearly approaching the cost of traditional hard drives.

Tiered memory dominates the market today. Nevertheless, SLC-products, despite the many times lower capacity and high cost, continue to be developed and manufactured for critical applications.

Choosing a flash drive with Innodisk solutions as an example

The choice of solid-state drive for your computer depends on several factors, the most important of which are: form factor, scope of application, operating conditions, speed and resources.

The process of selection of any storage device begins with the slot and connector to install it. There are many form factors and interfaces available on the market today for connecting flash drives. It’s safe to say that the most common is the 2.5-inch form factor with a third-generation SATA connection interface. A 2.5" SATA connector can be found in almost every modern personal computer or laptop and is universal for installing a classic hard drive, as well as a solid-state drive based on flash memory.

CompactFlash memory cards with high read/write speed and capacities from 265MB to 64GB. One of the oldest types of flash memory.

Industrial CFast memory cards with a standard 7-pin SATA interface and a 17-pin power connector (different than SATA one).

Compact electronic drives with standard SATA interface (7 + 15pin). Due to its smaller size, SLIM SATA SSD is an excellent replacement for 2.5-inch drives when mounting space is limited.

Available with different interfaces: PATA and IDE. If you need to update your legacy system, then installing an SSD with IDE interface instead of a standard HDD will increase the system performance significantly.

Solid State Drives with SATA 2 and SATA 3 support. Used in compact devices and in industrial systems to improve performance.

Horizontal, vertical, with or without housing, low profile and rotatable DoM modules designed to be installed directly on the mainboard or with SATA/IDE cables (40 and 44 pins).

An industrial computer differs from its customer-class counterpart in many ways, but the most prominent differences are the capability to operate in 24/7/365 mode without interruptions or downtime, resistance to temperature spikes, vibrations, shock and high humidity. These demanding requirements to an industrial computer apply to all of its components, including storage devices.

Depending on the degree of protection against these factors, the price of a flash memory device also differs. Therefore, it is important to determine in what operating conditions the final product will be used and what temperatures and spikes it will be exposed to.

Flash memory drives can be divided into two major classes:

As we have already said, there are flash memory cells capable of storing 2 (SLC), 4 (MLC), 8 (TLC) or 16 (QLC) charge levels. In industrial Innodisk flash memory, only the first three technologies are used, due to stringent requirements for reliability. The algorithm for processing a charge consisting of 16 levels is too complex, and in conditions of voltage surges and possible radio frequency interference that may occur during the operation of an industrial computer, this can lead to a rapid decrease in the residual resource and, as a result, data loss.

In addition to the three main types of memory cells, there are enterprise MLC cells - eMLC. Innodisk calls these cells iSLC; they are the middle ground between the endurance of SLC and the more affordable price of MLC.

ISLC drives demonstrate performance and reliability comparable to SLC products, but are built on MLC memory hardware, making them a more affordable solution suitable for servers and enterprise segment systems.

When using SSD based on iSLC technology, you can be sure of data safety - the service life is increased several times compared to standard MLC products.

Here is a comparison table of memory cells used in flash drives, in terms of price/endurance/speed.

How to read Innodisk model names

Large industrial flash memory vendors such as Innodisk have a wide variety of devices with similar specifications across a range of product lines.

In order to find your way across this abundant selection and choose a drive most suitable for your specific tasks, you first need to figure out what kind of SSDs are available and what they are geared towards.

As an example, we will look at the model name of a 2.5-inch SATA SSD:

This number can range from 1 to 10, or there may be no at all. It has no significance when choosing an SSD-drive.

(-P) indicates the presence of a DRAM-based cache.

The clipboard (cache) is used primarily for storing the address translation table, which increases the speed of accessing flash memory and writing files.

SSD without DRAM buffer will slow down during long write operations of small files.

In addition to the series listed above, Innodisk offers a unique product – the fireproof 3.5” Fire Shield SSD.

The 3.5” Fire Shield solid-state drives are capable of withstanding open fire at 800C for 30 minutes, protecting the memory elements from external influences.

In this article, we have:

We hope this material is useful in easing your way into the vast world of industrial flash memory drives.