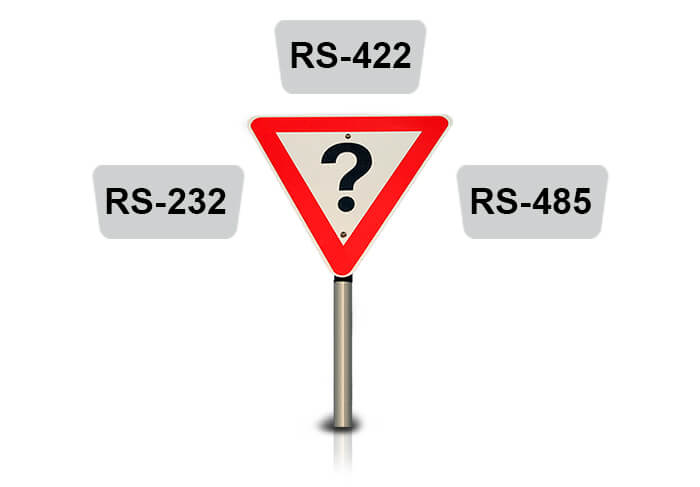 The RS-232, RS-422 and RS-485 designations refer to interfaces for digital data transmission. The RS-232 standard is better known as a normal computer COM port or serial port (although Ethernet, FireWire and USB can also be considered as a serial port). The RS-422 and RS-485 interfaces are widely used in the industry for connecting various equipment.

* For the RS-232 interface, it is not necessary to use all contact lines. Typically, TxD, RxD and GND ground lines are used, the remaining lines are needed to control the data flow. You will learn more about this in the article.

Information transmitted via RS-232, RS-422 and RS-485 interfaces is structured as a protocol, for example, the Modbus RTU protocol is widely used in the industry.

Description of the RS-232 interface

The RS-232 interface (TIA / EIA-232) is intended for the organization of data transfer between the transmitter or terminal (Data Terminal Equipment, DTE) and the receiver or communication equipment (Data Communications Equipment, DCE) in the point-to-point scheme.

The speed of the RS-232 depends on the distance between the devices, usually at a distance of 15 meters the speed is 9600 bps. At a minimum distance, the speed is usually 115.2 kbps, but there is hardware that supports speeds of up to 921.6 kbps. 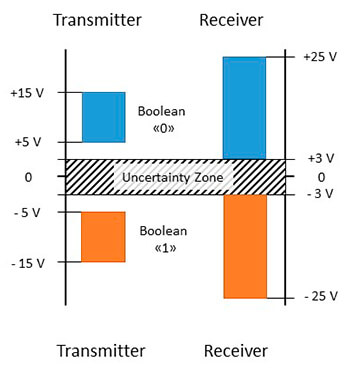 In addition to the two receive and transmit lines, special lines for hardware flow control and other functions are available on the RS-232.

DB connectors are divided into:

Pinout of DB9 connector for RS-232 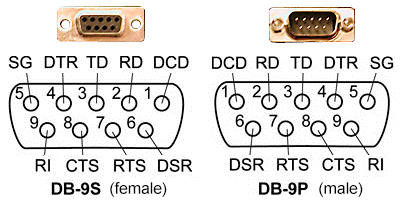 The DTE-DCE cable is called a "straight cable", because the contacts are connected one to one.

A DCE-DCE cable is called a "null modem cable", or in another way a cross-over cable. 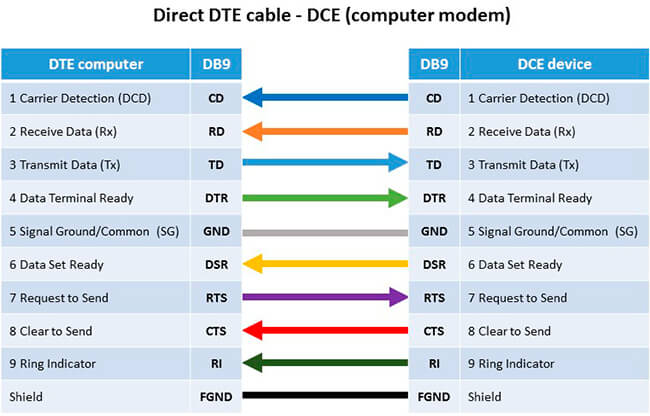 Pinout of the null modem cable DB9 for RS-232 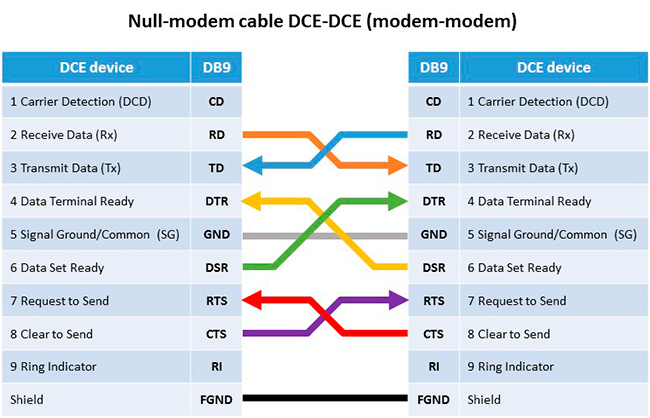 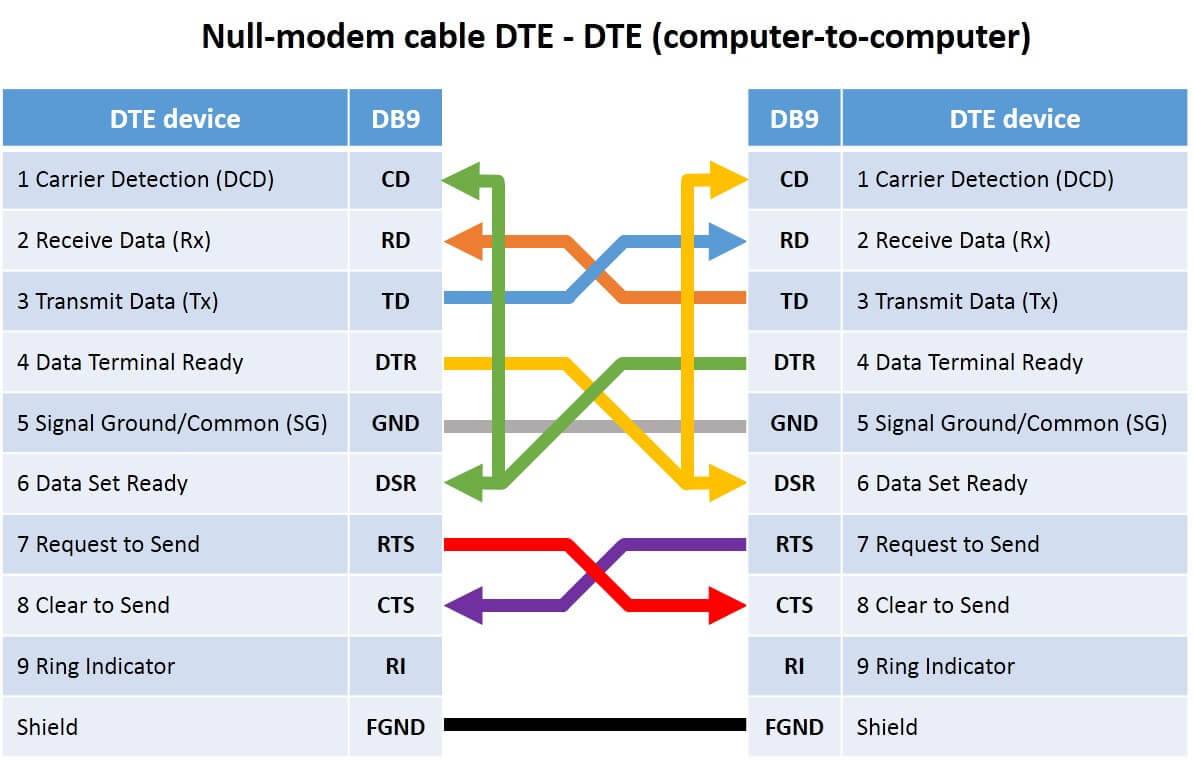 Table with pinout of DB9 and DB25 connectors.

To work with RS-232 devices, you usually need only 3 contacts: RXD, TXD and GND. But some devices require all 9 contacts to support the flow control function.

Structure of the transmitted data in RS-232

The start bit is the bit denoting the beginning of the transmission, usually 0.

Parity bit - A bit intended for parity checking. Serves for detecting errors. It can take the following values:

Stop bit - a bit indicating the completion of the message transmission, can take the values 1, 1.5 (Data bit = 5), 2. For example, a reduction of 8E1 means that 8 data bits are transmitted, a parity bit is used in EVEN mode and a stop bit occupies one bit.

In order not to lose data, there is a mechanism for controlling the flow of data, which allows to stop temporarily transferring data to prevent the buffer from overflowing.

There is a hardware and software control method.

The software method uses the Xon and Xoff characters (in the ASCII character Xon = 17, Xoff = 19) transmitted using the same TXD / RXD communication lines as the main data instead of the pins. If the data cannot be received, the receiver transmits the Xoff symbol. To resume data transmission, the Xon symbol is sent.

How can I check the operation of RS-232?

When using 3 contacts it is enough to close RXD and TXD with each other. Then all the transferred data will be accepted back. If you have a full RS-232, then you need to unzip a special stub. The following contacts must be connected in it:

Description of the RS-422 interface

The RS-422 interface is similar to RS-232. Allows you to simultaneously send and receive messages on separate lines (full duplex), but uses a differential signal for this, i.e. The potential difference between conductors A and B.

In the RS-422 network, there can only be one transmitting device and up to 10 receiving devices.

Twisting wires (twisted pair) with each other allows you to get rid of interference and interference, because the interference acts equally on both wires, and the information is extracted from the potential difference between the conductors A and B of one line.

The logical difference between A and B is greater than +0.2 V.

Logical 1 corresponds to the difference between A and B less than -0.2 V.

The RS-422 standard does not define a specific type of connector, usually it can be a terminal block or a DB9 connector.

RS-422 pinout depends on the manufacturer of the device and is specified in the documentation for it.

When connecting an RS-422 device, you need to make a crosshair between the RX and TX pins, as shown in the figure. 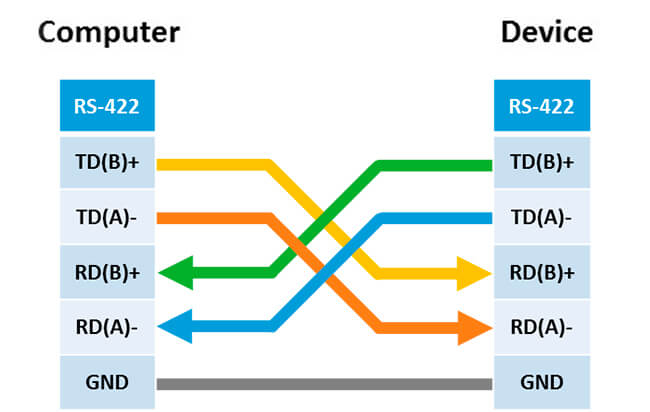 Because the distance between the receiver and the transmitter RS-422 can reach 1200 meters, then to prevent reflection of the signal from the end of the line, a special 120-ohm termination resistor or "terminator" is put. This resistor is set between RX + and RX-contacts at the beginning and end of the line.

How can I check the operation of RS-422?

Description of the RS-485 interface

In industry, the most common interface is RS-485 (EIA-485), because the RS-485 uses a multi-point topology, which allows you to connect several receivers and transmitters.

The RS-485 interface is similar to the RS-422 in that it also uses a differential signal for data transmission.

In full duplex mode, you can simultaneously receive and transmit data, and in half-duplex mode either transmit or receive.

In one segment of the RS-485 network there can be up to 32 devices, but with the help of additional repeaters and signal amplifiers up to 256 devices. At one time, only one transmitter can be active.

The speed of operation also depends on the length of the line and can reach 10 Mbit / s at 10 meters.

The RS-485 standard does not define a specific type of connector, but it is often a terminal block or a DB9 connector.

The pinout of the RS-485 connector depends on the manufacturer of the device and is specified in the documentation for it.

To match the line at large distances, the RS-485 is also equipped with 120 Ohm termination resistors at the beginning and end of the line.

How can I check the operation of RS-485?

If you have a device with RS-485 and you want to test it, the simplest thing is to connect it to a computer via a converter, for example UPort 1150, and use the special software described later.

On the computer, the RS-232/422/485 interfaces will be represented as a normal COM port. Accordingly, almost any programs and utilities for working with COM port are suitable.

Each manufacturer releases its own software for working with the COM port.

For example, MOXA has developed a set of utilities PComm Lite, one of which allows you to work with the COM port. 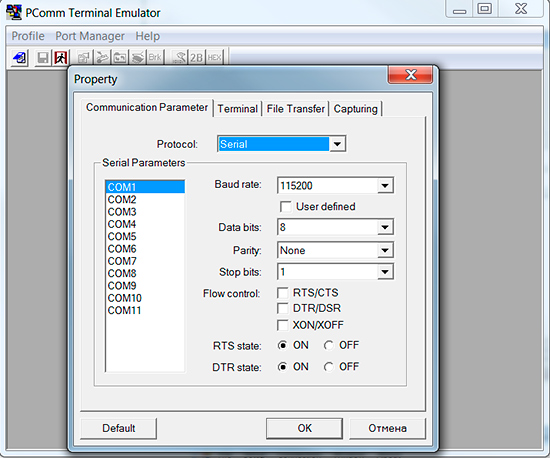 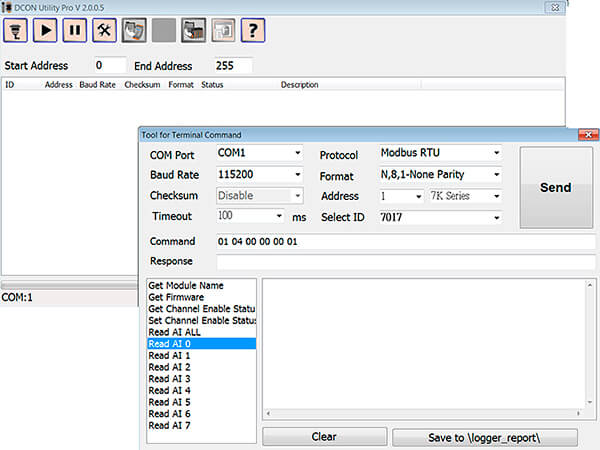 If you have any questions, please send an email at sales@ipc2u.com.