https://ipc2u.com/articles/knowledge-base/overview-of-the-bacnet-protocol-and-gateways-for-industrial-control-system-connecting/
15:23 27.01.2023
Home
Knowledge Base
Knowledge Base
Overview of the BACnet protocol and gateways for industrial control system connecting 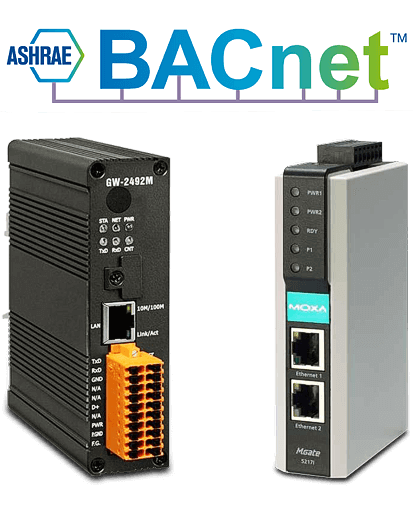 BACnet was developed by the American Society of Heating, Refrigeration and Air Conditioning Engineers ASHRAE, which led to the creation of the American standard ANSI/ASHRAE 135, and then the ISO 16484-5 standard.

A BACnet device consists of standard BIBB (BACnet Interoperability Building Block) function blocks that allow data to be exchanged between devices from different manufacturers. The BIBB block is a multilevel structured model consisting of several levels:

The BIBBs for each BACnet device are listed in the PICS (Protocol Implementation Conformance Statement) document, which describes in detail the type of this BACnet device and its ability to interact with other devices.

BACnet devices implement various services that perform communication and control functions. BACnet services have a client attribute (data request) - A and a server attribute (data provision) - B, for example, a property reader block for a DS-RP-A client device can be decoded as follows:

For example, a BIBB remote device control class might include the following services:

Services can be specified for the BIBB object access class:

Each BACnet device consists of standard objects. Here are some of them:

Each BACnet object has some set of properties that describe its behavior or control how it works, such as: object identifier, object name and type.

It is possible to transmit the BACnet protocol through LAN (Local Area Network) networks, which are represented by various technologies of the channel and physical layers:

If BACnet devices use the same LAN environment for data transmission, then each device from any manufacturer can directly access another device. This type of LAN allows for direct device-to-device communication. 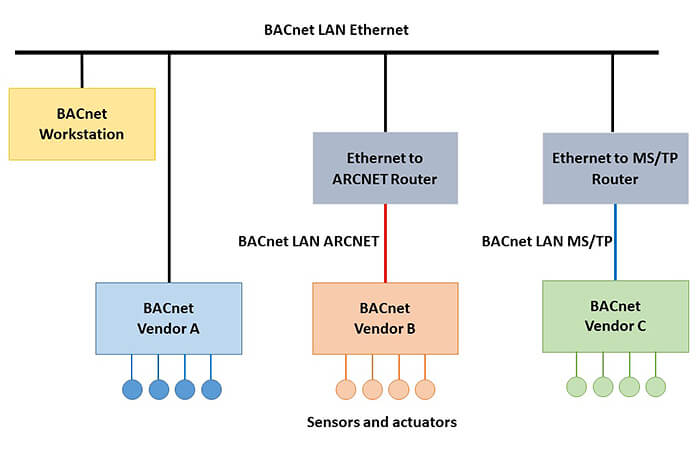 If BACnet devices use different LAN environments, then special gateway routers are used to combine them, which repackage BACnet messages in accordance with a certain standard of this BACnet network. 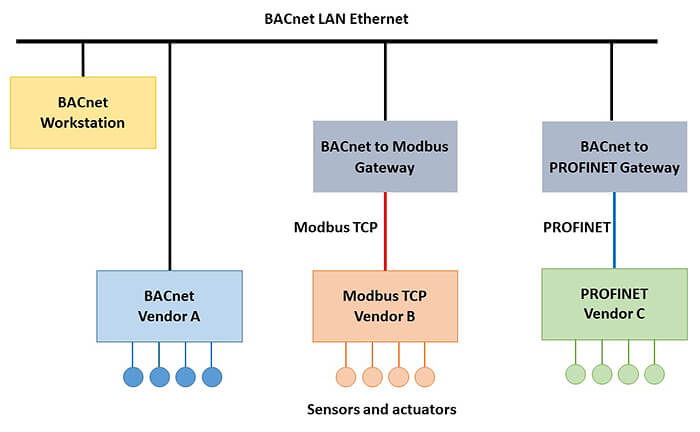 If devices with a different protocol and data transmission medium need to be connected to BACnet devices, then special protocol gateways are used. For devices to communicate over IP networks, the BACnet protocol provides 2 modes of operation: tunneling IP messages and using the BACnet/IP protocol.

Addendum 135a to the BACnet protocol introduces the concept of BACnet Virtual Link Layer (BACnet Virtual Link Layer), which allows a BACnet/IP device to access the IP network infrastructure as if it were some kind of local LAN network. This type of connection is called a "virtual data link". It allows you to conveniently use various networks such as Ethernet, ATM, SONET, Frame Relay, ISDN and others.

Message transfer from device to BACnet/IP device occurs directly via an Ethernet local area network or the Internet. Broadcasting requires the use of a dedicated BACnet/IP Broadcast Management Device (BBMD). BBMD also provides registration of a device external to the BACnet network. 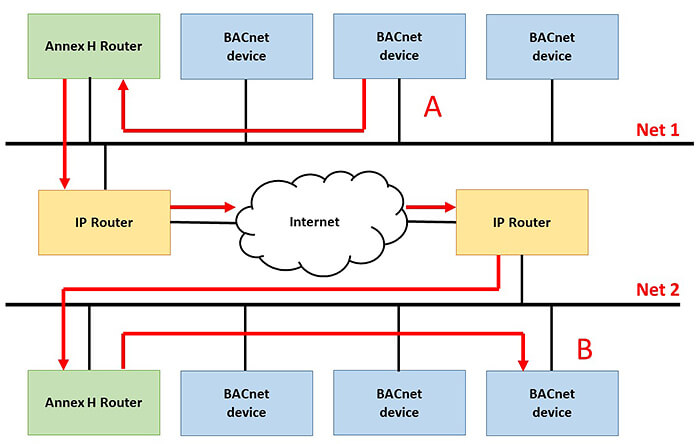 In BACnet IP tunneling mode, the device does not need to "understand" the IP protocol. Most of the work with the IP protocol is handled by a specialized router called the Annex H Router. 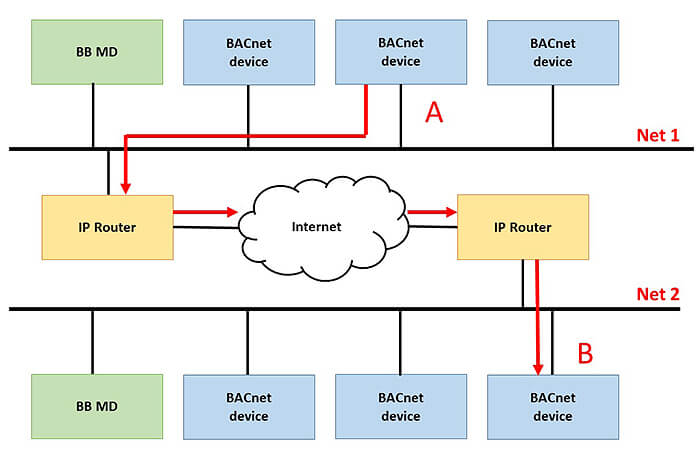 Devices with the BACnet/IP protocol are a full-fledged node of the IP network. They have their own IP address, support the IP protocol stack, and do all the work with the IP protocol themselves. Therefore, BACnet/IP devices transmit messages over the local network or the Internet directly without intermediaries. 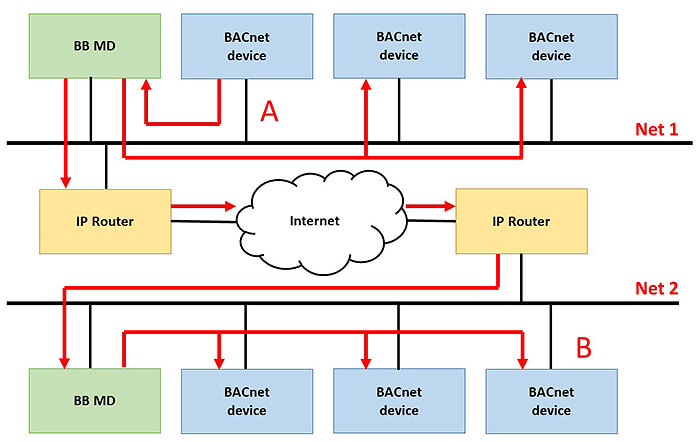 To connect an external device from the Internet to a BACnet network, use the BBMD device.

There are many devices with BACnet protocol that solve various tasks for building automation, heating, ventilation and air conditioning (HVAC) control, lighting and access control, as well as ensuring the operation of fire detection systems and other devices. All of these devices are intended for solving problems inside the building, but usually they cannot be connected directly to industrial control systems and SCADA systems, or vice versa. To solve this problem, special protocol gateways are designed, which are presented below. 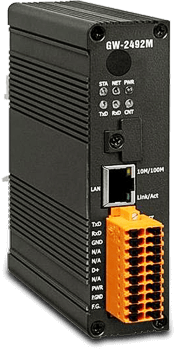 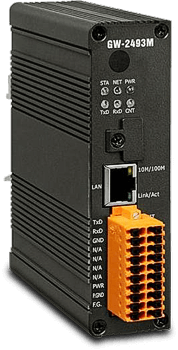 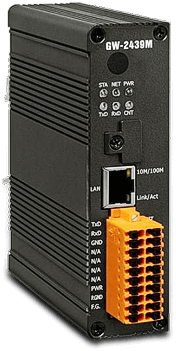 Back to Knowledge Base
Home
Knowledge Base
Knowledge Base
Overview of the BACnet protocol and gateways for industrial control system connecting
https://ipc2u.com/articles/knowledge-base/overview-of-the-bacnet-protocol-and-gateways-for-industrial-control-system-connecting/
15:23 27.01.2023