An IoT Gateway device is required to connect all IoT devices and equipment, such as systems and sensors, to the cloud. This systematic connection provides a localized storage and processing solution. In addition, it is possible to automatically control these computing devices based on the data from sensors, for example.

The problem: IoT-Gateway devices are unfortunately repeatedly affected by interruptions.

In principle, IoT-Gateways are not equipped with failover capabilities. So if a reboot, malfunction or system upgrade causes a problem, the data on the device is deleted. This data is then passed on again to alternative network paths. Such failures increase the transmission costs as well as the latency of the network in general.

The solution: Our partner NEXCOM has solved this problem by using a bypass mechanism in the IoT Gateway. 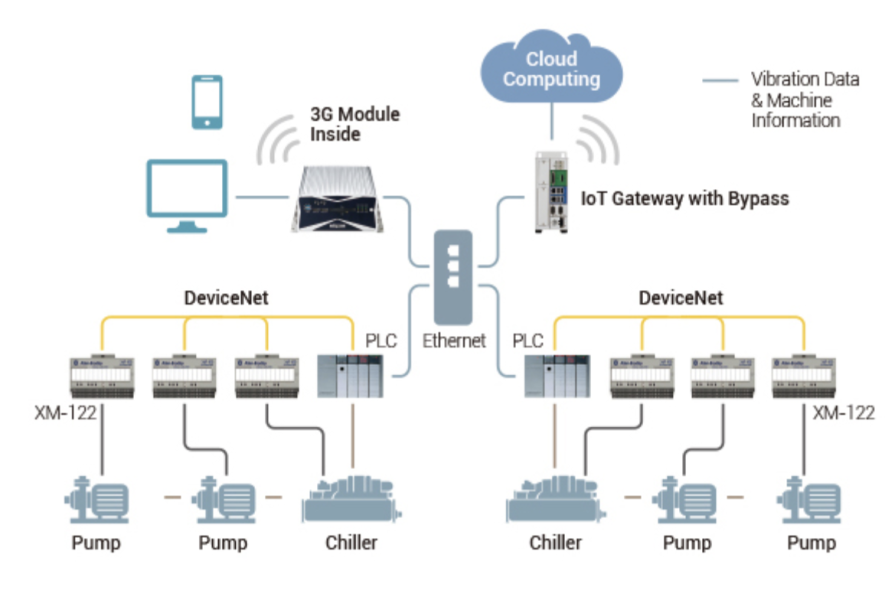 Solutionn: a bypass mechanism in the IoT Gateway

The IoT-gateway checks traffic during normal system operation. The bypass state is in normal mode. If the gateway now fails due to a restart or shutdown, this bypass can be switched to interrupt mode or bypass mode.

This works because the bypass mechanism is based on a software watchdog. Once the system is booted and running, the watchdog is triggered continuously, keeping the bypass in normal mode. However, in case of a system failure, the watchdog does not receive any more triggers and the bypass relay then automatically switches to bypass or disconnect mode.

The advantage: The driver of the bypass mechanism offers many more functions

The bypass control is closely linked to the system status. For this reason, NEXCOM has developed a Linux driver that supports all versions from kernel 2.6 to the latest kernel 5x. It also provides a sysfs control interface. This bypass driver can thus provide a wealth of information from all NEXCOM bypass devices. This includes:

Of course it also supports switching of the current bypass states and configuration of the watchdog settings. In addition, a power status protection is also integrated in the driver.

The conclusion: Network transmission costs and latency are drastically optimized

The NEXCOM Bypass System improves effectiveness and efficiency. If IoT gateway devices did not have failover capabilities before, our partner has solved this with an intelligent system. The driver's interfaces are extremely user-friendly and the adaptive configurations for four different modes can meet different use cases. NEXCOM bypass devices can easily manage both applications and system codes. The bypass driver can also be used for a variety of Ethernet controllers.

This IoT gateway including bypass mechanism is among the best in the world.

Back Knowledge Base
Home
Knowledge Base
Knowledge Base
IPC2U Presents: How To Avoid Critical IoT-Gateway Problems
https://ipc2u.com/articles/knowledge-base/ipc2u-presents-how-to-avoid-critical-iot-gateway-problems/
18:56 28.11.2020